MY FATHER -- HIS FIRST HEAVEN DAY 29 YEARS AGO

This morning, Dad's first-day in Heaven made me smile.  May 22, 1984.  I expect that he truly smiled, felt comfortable, and rejoiced.  Can hardly wait to see him there, since our life together was highly less than wonderful. 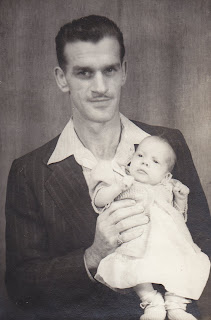 My dad was in and out of my life from my birth until about the age of 4.  I'd been surprisingly born through him and my mom in 1945.  They had been involved between Tacoma and Portland since 1943-ish, but no intention of a baby or a marriage.  They did marry when I was about 16 months old, but mostly to get people off their back.  Then they officially lived together.
Because of the extreme alcoholism that had kicked into mom and dad by the time I was 5, my relationship with my parents changed significantly.  [I've written many stories about it.]  It didn't take very long before I was watching dad carefully and ready to fight him to protect mom, myself, or my tiny sisters, eventually a total of 5. 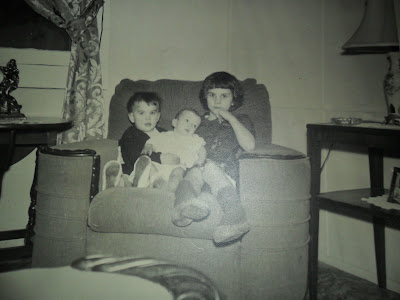 Sometimes I really cared for my dad... but most of the time I was heartbroken when he, trying to stay sober would "fall off the wagon", or when he was endangering himself and many of us while he was drunk.

Fifty years ago next week was my high school graduation day.  It was in Klickitat, Washington, a small town, a small class.  I was one of the speakers.  I don't remember too much.  One funny thing is that I was slipping my high-heeled shoes off behind the podium; I was afraid I'd be stumbling, tripping, while sharing my speech.

My dad had lost his job in February.  He had worked in the town's lumber company, but, when drunk, skipping work, again, a new boss fired him.  Well, with my graduation coming up so soon, we couldn't leave the area.  Couldn't STAY in town, because almost all the houses were owned by the company and we could no longer rent one or live in one.  Dad found a farm house a couple miles outside of town and that's where we were staying until I finished school.  That's a WHOLE story of its own.

Anyhow, shortly before my graduation, Dad found a job in a small town called Maupin, Oregon, about 100 miles south of Klickitat.  He showed up for my graduation just on time.

And he was drunk.

When I was speaking, looking at the hundred-or-so folks in the gym, dad was in the front row, on the outer edge, the right side of my sight ... and falling off the chair, kept falling asleep.

That's what I remember most of my graduation.  Know better things happened overnight with friends, including Susan and Linda, my dearest ones, but this jumped into my brain, big time.


I left home the next day. I rarely saw my dad ever again for more than just a short stretch of time.  He DID come to the Lord when I was about 33, and sent me these words in a letter that I received on March 17, 1979, and it states in part:

"I finally gave up my solo fight against alcohol and went to church ... I came away with an awful load off my back; I hadn't realized how heavy it was.  My problems are still here, but the Lord is sharing my burden.  I am really surprised at the feeling.

He died of lung and brain cancer just that next 5 years later.
Also the Lord laid a poem on me the day Niki called in September, 1983, to tell me he was expected to die very soon.  She told me to write a poem and send it to him.  I was in Tacoma in Thanksgiving, '83, with the whole family to see Dad for the last time.  He had a short testimony at his church on Thanksgiving evening.  It was a blessing to be there with him.


I still have the poem in my office, since it was returned to me at his funeral.  You'll sure understand the final photo and its words.

Two needn’t be close –
If you’re counting the miles –
To Share this world’s Days and its Night.
There are soul-mates
Who travel life’s path side by side
Though mountains and plains bar their sight.

Without Jesus to keep us, we’d Die – you and I
Eternally lost from our Lord.
Our hurts closed our hearts
to the goodness of God,
And we turned our backs to His Word...
We’re SO alike – like mirrors – mirror images

But He reached us – He found us
And He healed our hearts –
The greatest of healings provided.
We opened our hearts to receive  that great love,
And now He walks closely beside us.

So, I have two fathers.
One is IN heaven;
One IS heaven.

I'm so looking forward to seeing them together. 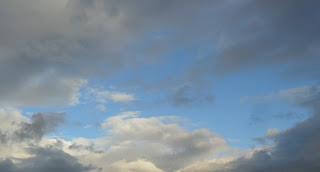 What an amazing story. It is a great reminder that we all have stories and shouldn't judge by appearances. So glad God took a hold of you life - and mine - and blessed you with a Father.

I am so happy your earthly dad came to the Lord and lived several years afterwards. Our heavenly Father is so kind and loving, and he will and does guide and lead us. Thank you for sharing your awesome storie at "Tell Me a Story."

Thank you for sharing your story Joanne. It is so moving.
I, too, used to look at God more as Judge than loving Father (not because my Dad was that way, but because I came from such a legalistic background.) When I saw who He really is, it changed my heart and life profoundly.
I'm sure your story is going to bless so many others.

This is such a touching testimony. He loves us so much and patiently wants to heal all of those wounds. Bless you, so glad that your life turned out the way that it did.

Our Father is in the redemption business. He holds your heart in His hand and pours in the love that you pour into the lives of everyone else. I love a good story with a happy ending...