THE GRINCH and INKEEPER'S DAUGHTER

As I've shared before, when I was 14, in October, 1959, my English teacher in Tacoma, handed me a book and told me she wanted me to memorize it, that I had a month.  So, I did.  And, as you would recognize, it was the book "How the Grinch Stole Christmas".  It had been written only 2 years earlier, so wasn't well known then.  My teacher, Mrs. Andersen, wanted me to do it in the English classes and the drama classes, in particular. [I was also asked to do it -- and did it -- on a children's TV show, WHICH, in those days, was NOTHING like it is today, believe me.  All that occurred, for me, was introduction and a camera guy who stood in front of me, eating an apple,  and just doing what was necessary to have me shown on TV, but there was nobody, no words in front of me in case I'd freak out and forget them, no one paying attention.  Scary!!]   Anyhow, that's when it began.

Since then, in these 53 years, I have done it hundreds of times in many places.  Schools, churches, parties, rest homes, hospitals, assisted living groups, and many others.  About 30 years ago, Judith at Calvary Lutheran Church where I attended here in Omaha, and had done the Grinch often,  made a costume for me.  A cape that was brown, junky-looking cloth on one side, and Santa-y on the other side.  And an ugly brown hat at the beginning of the Grinch and changing to a Santa hat when flipping the cape. Have had it all these years and worn it every time.  Even took it to Uganda in case there would be a chance to do it there... and, yep, did it.

It has been a real blessing for me.

THEN, when my daughter was 5, so that would put me in the 38-years-ago range of time, a book was dropped into my lap about Christmas and our Lord's birth.  It is called "The Innkeeper's Daughter."  I loved it.  One of the main reasons it hit me is because the girl's attitude towards life was just like ME, and her way of looking and behaving was much as I did.  WELL, when Renae was in 3rd grade, and I was going to do the Grinch in her class, it was worked out that I could read/share this other story.  I did.

In the next year or so, I memorized it and began to do it with the Grinch.  Grinch first, Innkeeper's Daughter second... and that way I would leave the room with the seed of God planted in the hearts of kids.  And then I also began doing it any time, anywhere I did the Grinch.  I didn't offer an option; just said these were my stories.

Seed-planting was my goal.

One huge blessing:  in 1980, I was asked to do it at a classroom.  The teacher is someone I had met when I was in real estate.  So, I went to the elementary school.  In her class, I did both.  Now, in those days, it was still considered OK, and I'd done it several times, in various schools, BUT the principal could become upset and, basically, kick me out and nail the teacher.  I was a little nervous about that this particular time, but the teacher insisted and I went ahead with it.  WELL, the principal showed up just as I finished, and, basically, asked about it.  We told her.  She immediately contacted the school teachers and broke the afternoon into 2 full assembly meetings, 300 kids each, and I performed both stories.  It so blessed my heart to do it; I've never forgotten that afternoon.

This was a newspaper article in 1981 when I was doing it at a hospital for kids.  Pretty cool, huh? 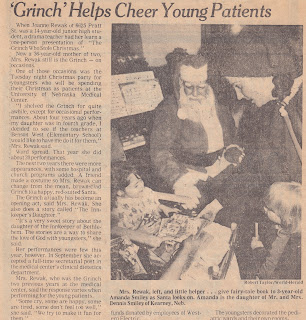 Know you couldn't read it, but the title and photo are cool.

Since then, in the last few years, Protestant and Catholic schools have had me to them, but I can't do "Innkeeper's daughter" any more in public schools. 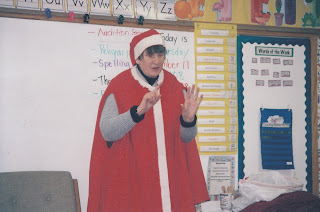 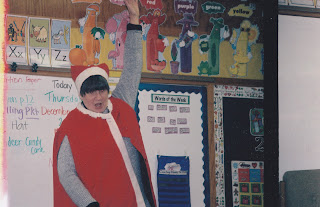 NOW, after 53 years, I think I'm done.  My memorization doesn't work quite as well as it used to.  I struggle a bit. Even after all these years of knowing both of them perfectly, I get stuck.  Dave, or someone, is there with the words, and will help, but if it happens more than once for each one, I'm annoyed. I don't want to have the listeners side-tracked while I'm suddenly losing my words.

Does it make me happy to stop?  Uh, Uh!!!  BUT, do I know I've blessed and made many laugh at my acting as the Grinch?  YEP!! And, do I know the Lord used me to plant lots and lots of "seed" in the hearts of hundreds and hundreds of people, from pre-school kids to folks in their 80s and 90s?

And that gives me hope.

What a life you've had! I love the pictures of you:) And what a wonderful thing you did for the children. . .and for God, planting all those seeds. They may be full grown trees now producing all kinds of wonderful fruit.
Thanks for sharing...you've made me smile :)
Merry Christmas!

Awww...loved this! What an amazing story and what an incredible thing God has used to do. I love it, sharing your light and the remembering of when you were a little girl and learned it!

Thanks for sharing this bit of you, miss Joanne. I'm sure you planted many seeds along the way... a blessing indeed!

Merry Christmas to you and yours.

What an interesting life you've led. So many wonderful experiences. I love this one! :)

Good for you! What a gift to give! The best part of Christmas is the truth of God and our Savior, Jesus Christ and the spirit of giving that He lived out for us. Well done, faithful servant...

One day you will know all the wonderful seeds you have planted Joanne.
Wishing you a joyous and blessed Christmas.

Seed planting that is what you did, and I believe someone else watered that seed.
The is an amazing and wonderful story how God used that story you memorized to bless others, then the Inn Keepers daughter! How lovely! Thank you for sharing at Tell me a Story.
http://letmetelluastory.blogspot.com/

Joanne, I had to add your message: Hazel

Joanne writes - - -
What's so funny, and I sent this news out to others today, is that my daughter fb'd about this "cancellation" of my "acting career" and said: "I would like you to do Grinch and Inn Keepers Daughter ONE MORE TIME tomorrow night if you're up to it. I will help!! PLEASE??"

So in a few hours, I'm doing them again, and, this time, it will be planting seed into my g-kids again and my daughter's present husband [who has never heard me do this] and his upper-teen/early twenties kids that will be there have probably never heard the Innkeeper's Daughter at all anywhere. Very little amount of spiritual gifting in their lives, from what I can tell. So, need to practice for a couple hours so I don't screw up too much! One of the funny aspects is that kids have seen TV shows and movie about "Grinch" but it's never been a fast "story" for them. They are always surprised at the fast direction the story goes, and, even when they think they'll be bored with this story they've heard or seen over and over again on TV, etc., they almost immediately get their attention caught by my fastness.

Anyhow, need to read my stories; don't want to do a bad job, even for family.

Thanks much. I was with the family this evening and DID do the two stories. Didn't have it as memorized as usual, but 4 people had never heard it and they seemed to be appreciative and pretty amazed that I had that much memorized. Got some good laughs... especially when, as usual, I put on the Cindy Lou Who bedcap with the braids hanging. Was a real treat. SO, done.

Thanks for your encouragement. Saw my daughter and son smiling. That counted a LOT.

What a treasure you are my friend. A lovely garden blooms because of you. Christmas blessings today and always.

You are an amazing woman, Joanne and a blessing to many…Including me. Merry Christmas, dear friend.

Finally had a chance to read this, Joanne. I remember when you came to visit you shared this with me--it was great to see the pictures to 'flesh it out.'