On one of my last days in the NW this Fall, I went to Vancouver, WA, to meet with my friend Linda. 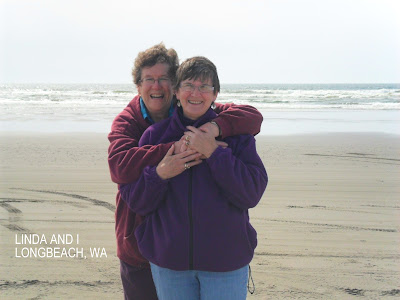 To start with, I met her for lunch on November 1st.  We were waiting for Elizabeth, my new "facial" blog friend.  We thoroughly enjoyed our time with her. 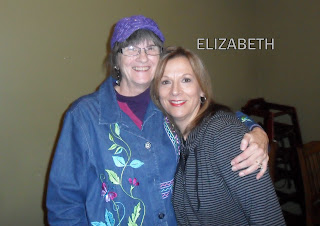 After that, we headed for Linda's home.  I was staying there for the night.  My next plan was to leave her place about 8 or so on the 2nd.  She wanted to have breakfast with me, and I thought that would be a great way to begin the trip. Then I'd be heading for Tacoma to see my missionary friends visiting from Uganda, and then, after lunch with DeVores, I'd be hitting I-90 ASAP. 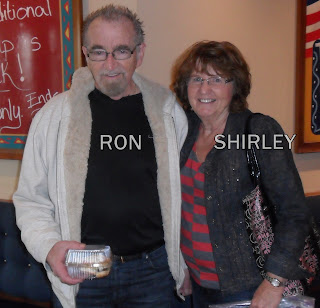 Had a great time with Linda at her place.  We yammered and laughed and shared and munched and crunched lots of good stuff.  And then bedtime hit about 11:00.

At 3 AM, I woke up.  I had been upset during a phone call that evening and it hit my heart, again.  I couldn't get back to sleep.  I tried to not make too much noise in the living room; her bedroom wasn't too far away and her door was open.  Well, Linda woke up at 5, which she had scheduled. I definitely AIN'T an early waker-upper unless there's an issue of some sort.

SO, because I was awake for so long, I told her I would leave earlier than I'd planned.  I'd hit the road about 7, and, even with rush-hour traffic, I could make it north and then visit Ron and Shirley near Tacoma for a brunch instead of lunch, and head east.  Would miss having breakfast with Linda, but reality was important to me, too, and it just seemed practical to head out earlier.

Well, Linda said that I shouldn't leave early, that we were going to breakfast in Portland and she had a gift for me.  Also, that we couldn't be there before 8:15 and I could leave about 9:00, which was the original plan.

I decided I'd do what she wanted.  Had no idea what her gift was, and didn't want to hurt her feelings.

We started the drive, me staying on her tail, and, although this next bit has nothing to do with the reality breakfast, the scenery almost made me drive off the highway, even while crossing the bridge from Vancouver to Portland.  WHY? 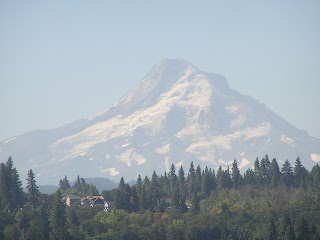 My photo of Mount Hood in'08
Mount Hood was very clearly seen that morning ... no fog or rain or clouds, which was not normal at that stretch of time during the Fall ... AND the golden sunrise view profiled the whole mountain.  I could only see it in my rear-view mirror, and could hardly stay in my lane.  Linda told me later that when she saw the mountain she knew Joanne 'd be trying to figure out how to stop and take a picture.  I sure wanted to.  I loved it so much... and would've if I could've ... but didn't want to cause a crash and die in it or end up in jail for breaking the traffic law.  Oh, well.

I followed her to a Sheri's Restaurant not far from the bridge.  When we went in, she requested a 4-person table.  I thought, "Hmm. Now what?"

A few minutes later 2 ladies came in and I immediately recognized them... in spite of the fact that I hadn't seen them personally for 49-1/2 years.  We were in high school in Klickitat and graduated in '63.

What a treat!  We shared, we talked about serious situations and funny ones.  We showed caring.  We left after sharing, hugging, encouraging.  I would love to see Petra and Johanna again.  Oh, and Linda, too, of course! 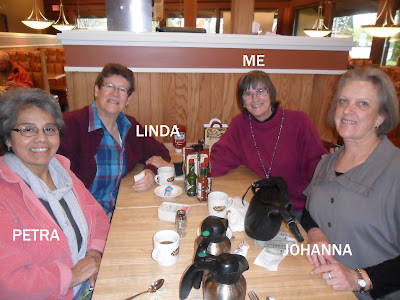 It was fun to send the photos to Susie. There were only 11 graduates in our class... small school, doncha think?... and with the four of us and Susie, now "seeing" each other, that covered a good percentage of the class, obviously.

It was a treat to be so beautifully treated.

[Maybe 2 more NW stories in the next few days and I'll be done -- finally.  It was a wonderful, joyful, blessed 3-weeks travel-time.
Can't ignore the people and the places and things.]
Posted by caryjo at 9:33 PM

It's fun to see the four of you together.

Good for you! What a great surprise! You are definitely a goer! Good for you. Life is short. I need to take notes.

What a wonderful and touching story. I can just feel the joy reading your post.
Thanks for sharing and have a nice week end:)