FIRST RESPONDERS -- & SO COLD OUTSIDE 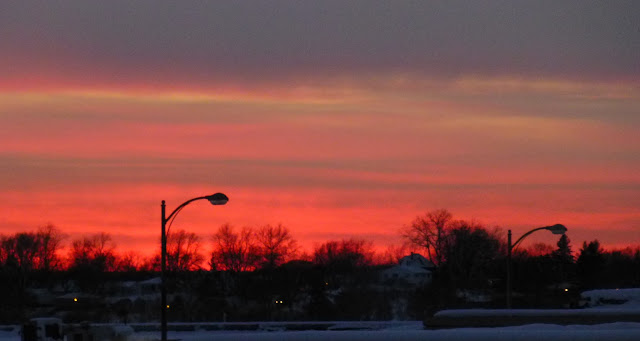 Just as we began to pray, this was in my sight.
Couldn't NOT take a picture.
When I heard about this murder... Milton, 42, who had been stabbed Christmas Eve while fussing with someone in an apartment parking lot ... I wasn't sure at first whether I'd have the energy and guts to go there.  The reason.  It was pushing zero in our weather, and I get so, SOOOO cold.  Also, with all the ice on our side roads, driving up or walking up to the murder site could put me at risk.  Could I not go??  No.  It is only about 1-1/2 miles from my house; this is my prayer responsibility, "my" area.

So, went and was able to park in a lot down the street from the apartment.  Before we could walk up there, several of us had arrived.  Dave, the leader, was concerned about me and my dizziness issue and the ice and made sure the guys were holding my arm and watching me.  HOW NICE!!

When we reached the apartment parking area, we were met by the Pastor of a Methodist church that was below the apartments.  She introduced herself to us.   Then the lady, Ashley, who had been in love with Milton, came out from the apartments to have us pray for her.  Her best friend came along.

In the cold, about 8 of us F.R.s moved in closely together, held hands, and prayed.  Ashley was placed in the middle and we laid hands on her.  She cried and cried.  Then, after we had finished praying for her, she prayed.  She asked the Lord to help her and thanked Him for being her Savior.  We were all so heart-touched by her prayer.

As we were beginning to break away, her friend said that there's a decision being made whether Milton will be buried in Omaha or in Chicago, where he came from.  And, it would be very difficult for Ashley to go to Chicago; she didn't have the money to do so.  Suddenly, I said that I'm a driver, that if she needs to go to Chicago, I will take her.  The Methodist pastor said she would pay for the gas.

SO... if Ashley desires to go, I will drive.

The crazy part?  I was just in Chicago in mid-November with my Bhutanese "family" that needed to see their relatives.  I had not been to Chicago for years and driving up there and around the city "drives" me crazy.  BUT, if that is what Ashley needs, that is what I will do. It's about 450 miles from here, and with the wintery issues, it could take some extra time.

I'm sure I'll hear in the next couple days and know what I need to do.  IF I'm heading out, I'll holler on FB and my email so you'll know.

Do you wonder why I would be willing?--

Ashley, while crying, said she wants to go to his funeral and kiss him goodbye, one last time.
Posted by caryjo at 11:12 PM

Bless your heart!!! I'm sitting here crying because this is what it's all about...sharing the love of Christ, helping and serving others in His Name. I will be praying for you and for her. God bless you! :)

I visited the Assemblies of God church here in town to deliver some of my books that members had ordered. My church lets out early so I have time to go to AG church. The Pastor has been there many years, and has suffered a stroke. He uses a walker but continues to preach while holding a mike. It made me think of YOU who are willing to get out there even when some need to hold you up lest you fall. Then volunteer to drive a sweet girl. If God prompted you to volunteer, he will provide the strength to take her to the funeral.

Oh my, well I am hoping you won't have to drive to Chicago as I hear the weather is getting bad. Send me a message or post on fb and I will give you prayer cover, it is the least I can do!
It is a needed ministry and I'm so thankful you are willing to walk into that. A bold spirit you have dear sister!!

What a heart wrenching story! At Christmas... This fallen world keeps us sober and looking toward our Father in heaven. God bless you, Joanne for being His hands and heart. You are one of a kind, sister. God bless. Keep us posted.

You always amaze me Joanne. Your heart is so tender to the leading of the Father. I'll be praying for you. I haven't kept up with blogging much over the past couple of weeks, but please know I will always be here to pray for you dear heart.