After my divorce in Oklahoma, the Lord sent me back up to Omaha, because that is where I had a supportive system of dear friends, having been here from '74 to '82.  I arrived back here over Labor Day weekend, 1984, and lived with friends for a month until I had a job and found an apartment for me and my kids.

In April, the previous Springtime, I had begun to have heart pounding and nerve pain in my upper arms.  The family stress was driving me crazy, to say the least.  Later that month, on April 27th, the Lord truly laid on me to file for divorce and get my kids free.  They were headed for truly dangerous circumstances ... as was I.

During the summer in Oklahoma it was an extremely hard time ... extremely hard,  nothing I could have imagined when the separation went into place.  I had no money or way to provide for my kids.  A local ministry for women gave me the basic money I needed, found an apartment, made sure I had food, and anything else that was a necessity.  Also, a banker married to a former work friend, "loaned" me money, but didn't require a payment -- I think that bank "hid" me.  I had left my job in February to protect my kids, even though my husband rarely worked and was furious that I had quit. and after the separation, I kept looking for one, but during that phase of time many in Oklahoma had lost jobs, because of an oil issue.  The jobs I would normally have -- title insurance connected to real estate sales and closings -- weren't available at all. 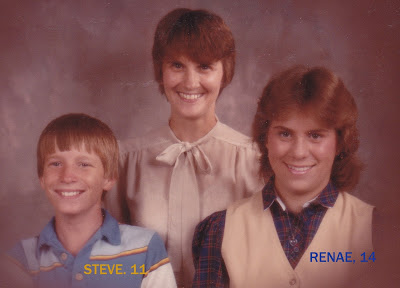 This was a gift from my ministry friend.
She desired to have my kids and I now shown as the only family members.
[Mostly, so the kids could be touched.]

When the Lord, so to speak, moved me to Omaha, the doors opened.  Many blessings dropped into my life... many.

BUT my heart was pounding irrationally.  I often felt that while sleeping, and waking up and feeling heart-stress that a breathing problem was increasing.  I had no insurance, no extra money, no doctors I could afford, so couldn't be checked out.

I made some friends at a Teen Challenge get-together time at a local church where music and skits were part of every Friday evening.  It was a joyous, friendly, out-growing time.  Loved it!

One of my friends, Ken, mentioned a healing service at an Assembly of God church on Sunday evening in October and wanted to meet me there.  He said he would be in the balcony area.  So, I planned on going.  NOT for the healing service, but to spend time with my friend.

When I arrived, I discovered he had not come.  But I couldn't leave the service.  It had begun and I was interested in the singing and knew it could be a neat time to watch people be healed.  Had seen that ministry in place many times over the years in a variety of locations in various States.

Shortly after the service began, the woman said, "All here who have suffered from grief this year, please stand and we will pray for you."

Approximately 900 people were there and 700 stood, of course.  Me, too, although I didn't see this as "grief" as much as "stress".

She and her friend would bring up the next ones, such as knees or lungs or migraines.  People would stand and be prayed for and healing would come to them.  It was nice to watch this occur so beautifully.

In between these healing sessions, focusing on the Lord's gifts, she would say, "One of you had grief and your heart nearly stopped.  The Lord has a Word for you."

Around the 4th time this was brought up, I thought, "Hmm.  Maybe it would be me, but I'm in the balcony and if I am nearly in the front, and someone stands from the 2nd row and says, 'Oh, it's ME!' I'm going to look like an idiot."  So, I wouldn't go.  AND, as I said before, I truly didn't refer to the problem as "grief"... only "stress".

The next time, however, she said, "I don't care if you are in the balcony.  The Lord has a Word for you."

I knew I needed to go down, and I did.

As I neared the front, she looked at me and nodded.  The Lord must have let her know it was truly me.  And she definitely had a Word for me.  She held me close and said, "You have been in grief, and the Lord says, 'Your heart has been shattered into fragments, daughter, but I have not lost a piece, and I will put it back together.'"

Much of the time those previous months, in spite of the fact that He had done much for me through so many, I had felt as if I had lost the Lord.  Much sinful garbage connected to the divorce-changing lifestyle had invaded my life that summer in ways I had never anticipated. I had felt Him tap my shoulder many times and tell me I was still loved, was still His.  I couldn't turn my head towards Him, all I could do was cry.

After this healing service occurred, it wasn't my physical heart, but my spiritual heart that was healed.  However, the physical one was also improving...

I don't question the power of God in this universe... After all, He made it and sustains it along with every breath and heartbeat of every living thing in and on it. If He decides to change anything, who can stop it?

I like the fact that you could feel the miracle from the inside out... Just goes to show how we are really made and exist. Glory to God!

I don't question the power of God in this universe... After all, He made it and sustains it along with every breath and heartbeat of every living thing in and on it. If He decides to change anything, who can stop it?

I like the fact that you could feel the miracle from the inside out... Just goes to show how we are really made and exist. Glory to God!

I have witnessed miracles and been a part of them too. God is still in the miracle working business!
Thank you for sharing at Tell Me a Story.

I was riveted by your story. I'm an original Oklahoma gal. I'm so sorry for what you went through but praising God for bringing you through it and for the healing...both ways! Glory to God!