I posted about my fear of snakes  in April.

Life began to change early this week.  Most mornings I am out and about on my 3-mile exercise walk.  Every once in a while I hear the Lord tell me to walk down a side block, and often don't know why.  Sometimes I meet someone.  Other times I simply pray regarding the houses and any other spiritual aspect that might pop in.  WELL, this time He told me to head down a block I hadn't taken before.  As I was 1/2 way along, I saw a garter snake on the sidewalk.  I stopped.  I wasn't sure whether it was dead or alive.  I shifted a tiny bit, and it stuck out it's tongue.  When I started to move again, it rushed away from me and up into the yard.

The good part?  I DID NOT SCREAM!!!  [I've done it before and caused other people to laugh.]  What does this mean to me?  The Lord has been healing my heart-filled fear of snakes. [Doesn't mean I want to go play with them, though.  Uh, UH!]

When I was thinking about this a couple days ago, I felt I had one I could share that would be funny/interesting. Might not scare you too much.  Here goes:

When I was in Uganda last time, arriving in November, 2003, I was staying at the New Hope Uganda orphanage.  My son and daughter, Sam and Adhe, didn't have space for me, so it was arranged that I could stay with Marian, a sponsorship director from UK.

One morning I was sitting down at the table to eat my tea-and-toast breakfast, glanced out the window, and saw a dead python being carried around. 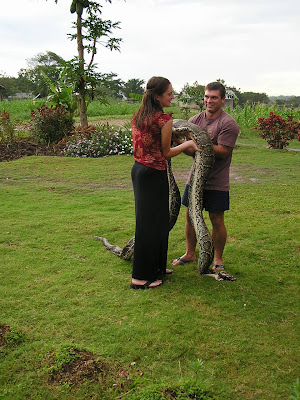 With my snake terrification, if it had been alive, I would have been climbing up the walls to reach the roof and not risk being chased or touched by it.

However, in this case, instead of hiding, I grabbed my camera and headed to their yard.  Took a few photos.  Sometimes the photos weren't as crazy as the words I was hearing.  The two girls had draped the python over their shoulders and wrapped it around them and then one of them said, "Yuk!  It's leaking on us." [It had been dead since the day before, so it's body fluid was pouring through the surface.  I can hardly imagine anything more horrible!]

Then I took the photo of it being held by the group.  It was about 15 feet long. [The house I'd been staying in is in the background.] 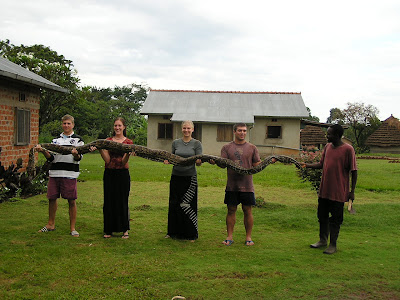 One of the guys prepped the skin for making and selling a variety of items.  The next day I saw one of the young fellows of a ministry family holding it. 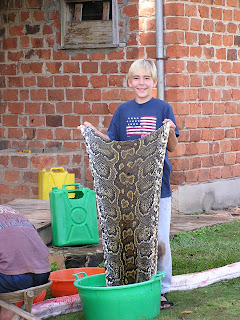 I wouldn't have accepted one of the items if given to me as a special gift by my best family or friends... whether there or here.  But many people around the world love the purses, shoes, belts, wallets and other merchandize pieces. 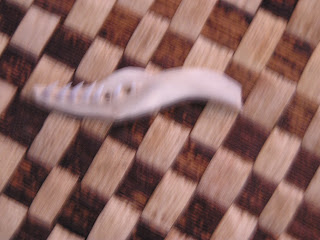 Have so many cobra 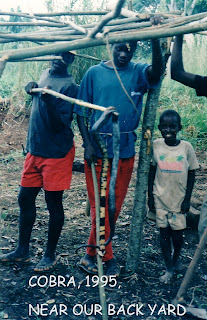 and python stories during the 12 years while in and out of Uganda, but this python bit the main one that made me grin.

Grinning is a rare "snake" experience, but I DID IT! How cool is that??

Yuk! Makes a shuddery bedtime story which is when I am reading it. But I'm proud of you and the progress, and yes, it made me grin.
Me

I hate snakes... I find them creepy. Well done you not screaming. If it had been me, you'd hear me scream from one end of the globe to the next! Urrggghhhh!!!!!! Please God - don't take me face to face with a snake!!!!! Unless You want me to practice for the next Olympics!!!!!