One evening in Marrakech, we were downtown eating at the outside food stall that was known by our main leader, Chris, a YWAM-er from California who had been to Morocco several times. He liked these men and they were very friendly. 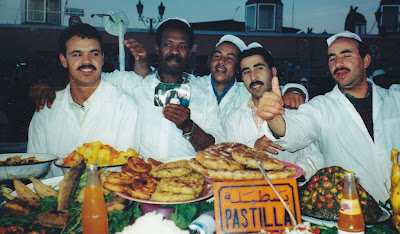 They obviously enjoyed having tourists hit their bench.  They were very nice to us and the food was great! 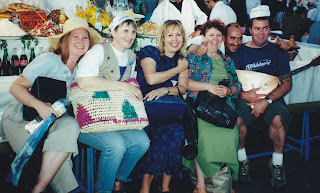 Now, backing up.  The day after we arrived in Morocco and began in Casablanca, we had a meeting with all the various people who had arrived from the States and Europe, about 200 folks at this beginning phase.

Other than those of us who were visitors and going to be on our prayer-buses, there were "missionaries" who met with us.  As some of you might know, missionaries are not received in this country by title.  Some people who come and take on businesses or jobs, also use this as an opportunity to encourage the Believers that are in place already, many underground. This couple, Don and Rose Johnson, that I connected with for a few minutes, had been in Morocco for about 20 years.  They were in their 70s.  He was a veterinarian in Rabat.  We didn't discuss about where they had lived in the States; we were much more intense covering many serious issues.  All of us newly arrived folks were so busy and learning so much, we hardly had time to talk to anyone outside our bus group.

I saw this couple again a few days later in Marrakech.  We were having a Palm Sunday service at a hotel.  Not only the first approximately 200 of us, but many more Europeans and some Africans arrived for the weekend bringing the total to about 400 people.  According to the government representative, who sometimes gave us information or instructions, this was the first time a Christian worship event in public had been allowed.   [Believe me, it was an amazing service!  I've never seen anything like it.]

After church, I took a photo of them.  Never, ever, thought I would see Don and Rose again. 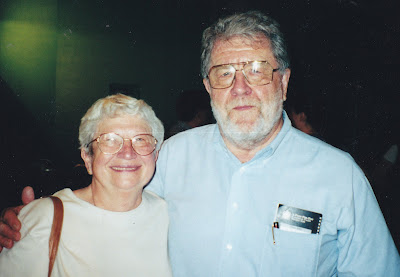 THEN the almost-miracle occurred.  That Palm Sunday evening in Marrakech, after we had eaten that great meat at the food stall, my church friend, Kathy, and I were rushing around the other outside sales areas and tourism shockers.  [We DID avoid the snake charmers and magic circles, believe me.] 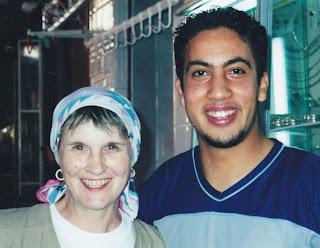 Our bus had arrived a few minutes earlier, was parked on a main street, and its allowable time to be there was limited. We were all supposed to hit it quickly.  Kathy and I are pretty rules-oriented and didn't want people to be upset with us.

We had been walking quickly through the market place, headed for the bus area, thousands of people around us, and suddenly the Johnsons turned around from a dessert stand.  We were suddenly face-to-face.  And smiling Big Time.

I was so happy to tell them goodbye.  Then, for some unexpected reason, since Kathy and I were supposed to be focusing only on the bus, Johnsons and I suddenly talked about where they went when in the States for a break.  If only the bus wasn't a serious issue, I would have jumped up and down and hugged Don and Rose a million times.

when in the States on vacations, they attended my husband Dave's family church in St. Paul, MN -- North Heights Lutheran. Dave had been there since he was about 10 years old, and this church was one of the most significant charismatic churches in the whole Midwest.

Within a minute or so, Kathy and I rushed away. Everyone else was on the bus already, and people had seen us and were hollering.  I was disappointed.

But, on the other hand, I have never forgotten Don and Rose.  To have them dropped into my life 3 times, and the last one being connected to both me and my husband, I did rejoice.

[And, BTW, the team on the bus forgave us when we explained what had happened.  That was a good thing.]

How exciting to have such a special couple dropped out of the blue into your life even for a fleeting moment. Our world gets smaller every day! :-)

Yeah, I'd say that was no coincidence! But then it never is with God... Great story!

Some people believe in coincidence and luck.

I believe in God.

Fun reading, and I thought it WAS a miracle, not almost! Me

I love the blogs about Morocco! I haven't thought about that trip in a while. :) It's so fun to see things thru your eyes... some of my memories are a bit fuzzy, but I do remember the praise/worship session as spectacular! At that service I ran into a young lady named Sally, who was a Y-WAMer. We had actually met in Pakistan when her short-term team came to Peshawar to help us teach for 6 weeks. While their experience there was probably not the best (had to do with who was running the school at that time), Shawna and I loved getting to know their team members. It was a wonderful surprise to see Sally again!
Isn't it fun when the Lord does that sort of thing?

What a fantastic, live-changing trip! :)

I enjoy your stories! So many God moments and amazing ways He is faithful. I love how He places people in your path. Blessings!

So you realize that missionaries are not welcome in Morocco, but you post their picture on the internet and call them missionaries?