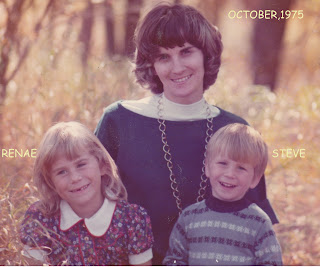 This photo was taken 8 months after miracle occurred.

This involved Steve again, but the income and outgo was truly aimed at me.  He was used by the Lord to open my heart towards Him and trust Him even more.  I definitely was not a "Father" lover, yet ...  a basic Father follower, obeying when instructed. I tried to stay out of trouble as much as possible.  That was my goal.

God had, of course, stepped into my life very strongly a number of times  since my day of salvation, but, pushing nine more years, I was still never sure whether I was truly cared for and loved; instead, I felt I was put up with.  Since I was raised  with a "watching for exits" mentality, this New Life  hadn't broken into my heart on a regular basis.
February 12, 1975, I had a day off work.  My job had begun at an office in early January and, after my first paycheck, I had left my friend Susie's home and moved into an apartment. It was all coming together beautifully.  BUT I needed time to go to the utilities company and run some apartment-related errands and that was the first day I could, since the locations were open only during the business days and our “normal” work hours.

The night before, my son, Steve, who had just turned 2 on January 17th,  began whining and pulling his ear.  I refused to take it seriously, because I had chores to do and places to go and I couldn't risk losing that time.  I, basically, ignored him.

In the morning, I took him to Karen, the babysitter, told her his ear seemed to bother him and I'd be back when I was done running around.

I arrived at Karen's about 4:00.  She said he seemed to have a pretty high fever, but she didn't have a thermometer.  I touched him and he did feel hot, so I called a doctor's office.  I told the receptionist my son had a fever and he needed to be checked.   The receptionist, sounding annoyed, said, basically, it was OK to bring him in, but to get there as soon as possible, because they closed at 5:00.

I hurried.  When I walked in, a nurse had me take him to a room, and she took his temperature.  IMMEDIATELY, she started tearing his clothes off, hollered at another nurse, and they piled ice into a children's bathing tub, and forced him in, spreading the ice all over his body, him screaming, of course.  I was wide-eyed and didn't know exactly what was going on.  Finally, one of them said that his temperature was 105 degrees. They were anxious and working hard; I was horrified and felt that the "awful mom" had surfaced.  After about half an hour they were able to dress him ... he had been one unhappy boy! ... and the doctor gave me very clear instructions and, at the end, said that if I did everything carefully and correctly he would probably have the temperature drop much closer to the normal range in 24 hours.

When I got home, about 5:30, I put him in his pjs and laid him on the couch.  I hugged him and knelt down and cried and told the Lord I was so sorry I hadn't paid attention to Steve and hadn't tried to take care of him the way I should have, that I had put my errands first and ignored him.

Then I went to the kitchen, just a few feet away, and started cooking dinner.  I'd glance at him every few seconds, and he was sleeping.

An hour after coming home, having  been given a thermometer when leaving the doctor’s office,  I took his temperature.   I looked at it.  I took it again.

My life changed.  YES, Steve had been healed of allergies and iron deficiency the previous August, only a few months earlier, but neither of the consequences while going through that phase had been “my fault”.  It was simply life.  This one, to a significant “degree”, WAS my fault.  And, yet, God ... my FATHER ... stepped in to bless my heart, to let me know that I WAS His daughter, that He cared for ME.

I honestly don't know if Steve even recalls or knows this story.  But I have never forgotten a detail.  Why?  Because my heart began to be healed from fear of a Father -– any father -- and then taught how to rely on and love Him.  It didn't happen overnight, during that one short time, but the seed was planted deeply and solidly into my heart ... and, as stated before, MY LIFE CHANGED.

Since then I have grown to love -- and trust, and appreciate, and respect -- my Heavenly Father so much I can hardly wait to see Him!

It's a real blessing to read about your life, i.e. the ups and downs and the way you went through all sorts of difficulties to get to where you are in your faith today... looking forward to your next post!

Thank you for linking up with Scripture Sunday and sharing your testimony Joanne :D

Hello, Caryjo. I am visiting from Wendy's blog. I loved reading your testimony of healing and faith here. Can't wait to read your next one. Have a wonderful week!

Wonderful testimony Caryjo. Sometimes it takes a hard 'knock' before we learn to listen to His voice. Your son's quick healing was a true blessing..

fatherlove is something
i'm leaning into the Lord
to enable me to fully embrace
and trust.
beautiful story....we're so much
safer
and more loved
and more treasured
than we realize:)
thanks for the sweet reminder,
Jennifer

Quote: "...they [lilies] are faithful... come back immediately at the right time of the season. Good reminder of our Lord's faith and character."

This is a real good point to ponder... thank you for your comment re: lilies over on ECTaS!

What a beautiful testimony. I love your heart!!!

And I especially love the last line of your post. Praise our wonderful Father!

I so appreciate reading about God's faithfulness in your life.

I have been in similar situations with my children ... waiting too long to respond to illness, and then feeling the Mom-guilt wash over. NOT a good feeling. So grateful that your boy was healed ... and so quickly!

It is a blessed thing to have a lifetime of miracles and walking with him. Sweet memories of his faithfulness. This is a nudge for me to begin praying for healing for our little grandson. he went to the doctor Monday and his jaundice levels are still high, the doctor thinks he may have Gordon's disease that is affecting his liver. He thought he was a little bit behind and felt it was the jaundice. I am praying for a miracle and the jaundice levels to go down. For healing for him../
Our little grand

Thank you for sharing yet another amazing true story at "Tell Me a Story." Many have not had a truely good relationship with their bio-logical father, but it is wonderful when our Heavenly Father shows us His love and we accept Him as our Father in Heaven

Thanks for the reminder about how precious our children are and that, sometimes, other things can wait!!

What a scary moment. Thanks for the reminder to treasure every moment with my four little blessings!

Your testimony is such a reminder to treasure what God entrusts to us. Thanks for sharing.