At the age of 80, after fifty years of alcoholism and a lifelong variety of abuses – both given and received – Mom, watching Joyce Meyers, turned to the Lord. She said, one evening when being invited to a bar by one of my sisters, "Beer ... Bible; Beer ... Bible;   Guess I’ll go with the Bible."

Until the life change, Mom and I had a rough relationship. As the oldest of 6 girls, and a corporate lifestyle of intensity, to say the very least, it seemed there was nothing we could talk about that wouldn’t begin a fuss of some kind. Mom was one tough cookie! [And I sure wasn't sweetness and light.]  As has been said by a number of folks over the years, Mom was much like the "Maxine" cartoons. I agree. Often that can be very funny, but the person who happens to be the target can feel slammed.

During my visits, prior to her turning to the Lord, if wanting to talk to Mom and visit her person-to-person, the only place I could go was to the tavern.  She would order a pitcher of beer and fill a glass for me.  I would s-l-o-w-l-y drink the beer, sip by sip, so the alcohol wouldn't hit me, BUT the blessing was that Mom would talk below the surface and share about her life in a way she never did otherwise and definitely wouldn't if I hadn't joined her.  [She knew drinking in a bar was not something that was part of my life, and I think she felt accepted or received in some fashion by me.]

After she came to the Lord, even though I lived almost 1800 miles away and saw her only about once a year, we began doing much better.

Here’s another example of how the challenges changed:
In 1990, Dave and I were planning a trip to Uganda to determine if the Lord was calling us there as missionaries.  I phoned Mom to tell her we were going over there. She said, sharply, "Why in the hell would anyone want to go to Africa?"  I was a bit overwhelmed, since she’d always been a travel fan and watched African nature stories nearly incessantly.

In May, 2000, a few years later, I was visiting missionaries in Costa Rica and the Lord dropped Proverbs 13:12 into my heart and I saw it as the answer to my confusion about Mom’s retort. "Hope deferred makes the heart sick, but when the desire is fulfilled it is a tree of life." Mom always wanted to travel, to go, to see, to simply enjoy nature around her. But Life had rarely allowed any travel.  Too much basic financial survival to accomplish, period.  No "play time".

How could I tell things changed?  In April, 2001, when I was preparing to travel to Morocco for a prayer walk, I called her to tell her I was leaving. I was nervous re: the anticipated angry and sarcastic response. Instead, she laughed and said, "It would be fun to see you on a camel." It was obvious the Lord had touched her heart.

[I never rode a camel – but rode a donkey through a Berber village as our group prepared to go to Marrakesh for Palm Sunday – gave this photo to her shortly after our return. She loved it!] 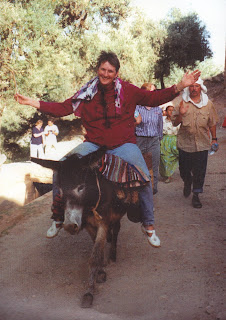 At 90, she was having a lot of struggles – on all sides. Her fear and frustration rose as her hearing and sight, ability to swallow, walking, all slipped away; the anger was becoming recharged... similar to the years past. I was told she had some slight strokes, but nothing serious. However, her behavior certainly was not a surprise to her family -- especially the ones who lived there and saw the changes day to day; for me, and other infrequent visitors, it seemed hard and harsh. I learned a lot during my last visit, sleeping on the floor outside her bedroom, hearing the various noises that indicated trouble breathing, difficulty in getting out of bed; I had never had to handle that challenge on a daily basis. The Lord was pouring kindness upon me ... and patience... and wisdom in a whole new realm of life.


and I will keep it forever.


Mom --
lately, thinking of you
makes me smile.


Jesus said we must be
childlike to inherit
the Kingdom of God.
[Childlikeness has not come easily
to you or to me.]

A child --
listening for train whistles
watching lions roar and eagles fly,
waiting in wonder for the sight
over the next hill, around the next bend.

And --
Not fearing
the Last Bend.

Knowing
Like a child returning Home
A Father's arms
will greet you.

[90th b-day surprise event; a number of kids, g-kids, g-g-kids and other connections.  She was one very happy lady!]

What a great story! I love the poem.
Sue

Thank you for sharing your tribute to your mother at "Tell Me a Story." God bless Joyce Meyer for sharing the gospel message so that your mother could understand and accept Jesus. You poem says it all for many of us as we come as children to the Lord even with our wrinkles and grey hair.

A great story... A beautiful poem. These are the jewels of life. Thank you.

What an incredible story! I have enjoyed the poem. Thank God He for we are all His kids no matter how old we are.

Very good, Jo!!! There were even some little snippets of info I hadn't known before. I guess we'll never know it all! Niki