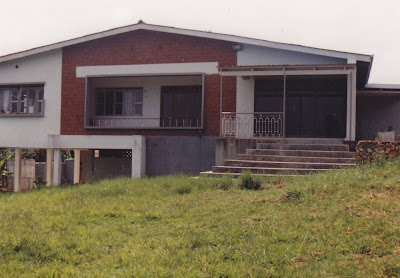 Dave and I had no idea the Lord was going to drop this house into our lap when we moved to Uganda. Dave and I were alone, so would we want something this large and pay this high rent? Not at all. But, through a series of events, this house, about 7 miles east of Kampala at Katalemwa on Gayaza Road, was laid on us. Very firmly.

The house was very large. We were very financially limited, to say the least.  Over a couple of months, Dave built our bed and one for a guest room. Bookshelves. A simplified desk. A picnic table for the HUGE dining/living room. That was it. The former people were wealthy. We weren't.

Even though we had very few household items, 2 days after we moved in, "Thanksgiving" weekend in November, we were given 4 teens for 3 months while they were on their December-to-February school break. We were asked by their uncle, Fr. Albert, to teach the kids side topics. Dave taught computer, piano and music theory, physics, chemistry. I talked to them about lit and writing and a little French language and world history.  And we both taught Bible lessons.

The main blessing that occurred in December was that Sam -- the house, garden, and security worker -- became our son. He still is.  And, through his future wedding we have a much larger "Sam family" -- including grandkids.  Who'd a thunk it back then? Not me.  And Sam-- and his family --  have become one of the hugest blessings of our lives.

Immediately, I fell in love with something I would never have expected.

Our property was a couple acres down a valley stretch and egrets flew to Kampala every afternoon about 5:30.  Between 50 and 300 of them flew over our house, many within 5 feet of the roof, the wings fluffing.  No matter where I was in the house or what I was doing, I'd run out onto the front porch, totally enchanted, thoroughly in awe.

One of the young men from Kampala that we became involved with was an artist. We had helped him in a variety of ways, and, in thanks, he gave us several of his batiks and his watercolor paintings.  And, to bless me, he made a batik that had my favorite yard bits and pieces. The egrets, a large rock that had a tree growing through it's crack, the flowers, trees, sun setting. 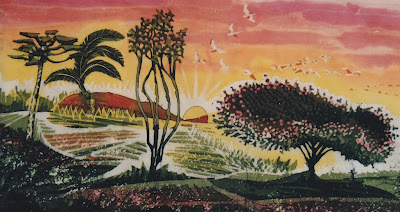 When having the batik framed after returning to Omaha in Spring, '96, it was stolen from the shop.  When the owner finally called and gave me that horrible news, I was buried in sorrow.

I've thought of it often, and recently the Lord reminded me that we had taken a photo of it all those years ago.  I started looking for it, digging through hundreds of pictures, and suddenly I found it.  I am "in love" all over again.  Can't frame it as a batik, but can have the photo enlarged and will have it on our living room wall soon.

I have so many stories I could tell about what happened at the house and yard... bird invasion; 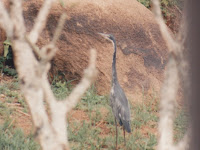 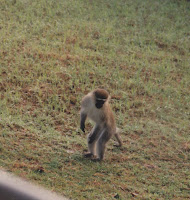 and... in-house bats, pressure cooker explosion, mamba snake in the hallway, malaria, hundreds of chicks being raised under our bedroom [not a good thing!], guests, guests and more guests.  I wasn't bored, believe me.

Hope you aren't either.

Will be waiting to hear some of those stories.

I loved the post of Katalemwa House. It is beautiful, and the memories made there can't be lost or stolen. I am a bird lover and the bird pictures and descriptions of the fluffing egrets flying over sounds awesome. I am so glad you found a photo of the stolen batik.

We have a small house, as you know, but God has placed many people there from several cultures in "bunches" as well as singles trying to find their way for days, months, and even years. So I sure can relate a little bit, and we came out with a "son" and "brother" and "daughter" through all those stays plus lots of adopted family members. God has definitely expanded our horizons.

The batik looks beautiful... love the fiery, warm colours. No wonder you were upset.

Your life sounds intriguing.... certainly NOT boring. There's something about birds and wildlife that's wonderful. We moved into the country about 8 months ago and the birds and wildlife capture our attention - we love to sit and watch. It's so relaxing.

P.S. Meant to say "Thank you" for linking with Scripture Sunday this week!

Sounds fascinating. Certainly not boring. God always knows what He is doing - even when we don't have a clue.