Niki was my first sister... in the next 3-pushing-4 years of births, Patti, Teri, and Betty arrived.  Kristan came about 5 years after those girls, when I was 13.

As I've indicated in many posts, we were raised in an intense and abusive home.  When it came to being responsible for my sisters, which began when I was 6 and Niki was a toddler and Patti was an infant, it didn't take long before I became a very angry babysitter. To be honest, I don't remember too much about their individuality in those beginning years, but overall, some became very angry, too, and were young fighters.

I actually don't remember whether  Niki was like that.  She had a less intense personality at times than the rest of us.  She observed some elements differently.  I used to think -- sometimes angrily -- that she lived in another world.  Niki rarely was a "go for the throat" kind of person, which I had almost always been.

The Lord broke into my life, and I came to Him when I was 20.  Five years later, when she was 19, and had just gone through a horrific violent experience while out and about one day, a lady, whose kids Nik was caring for, led her to the Lord right after Niki returned to their house.

Because my family lived in Tacoma, WA, and I had been shifted to Redwood City, CA area, Omaha, NE, and Edmond, OK, and was fairly poor, I rarely saw my family between 1969 and 1985. In those days, as you probably know, letters and long distance calls [calls quite expensive in those days] were the only ways to keep in touch.  In our family, it didn't happen often, because all of us were poor and addictions and other forms of abuse were still taking place.  Communication was not an easy aspect of life for us.

In the late '70s, during my first visit in several years, spending some nice time with Niki, she really re-entered my heart.

A couple weeks ago, I was re-reading journal papers stacked in my file cabinet, and I came across a poem I had written to Niki about 30 years ago.

When I had read that poem recently,  it made me grin... and I hope you will grin, too.

Oh, how we teased you
When you were a kid
Mostly, for scattered brain
Things that you did.

The fur-trimmed o'rnge hat
In the school pic you wore.
And saying your sentences
Backwards to fore.

The time that your teacher said,
"Draw me a pot."
'T weren't a flower or tea,
But a toilet she got.

The birds and the bees
Were nearly in peril
When you said the male frog
Makes the laid eggs be sterile.

I had laughed through the years
At the things that you said.
I have laughed right out loud
When they popped in my head.

But I want to tell you,
For what it's worth,
You're the best-hearted person
On our Lord's good earth.

Your spirit's so gentle.
Your love is so stout.
So certain that goodness
Will always win out.

Standing up tall for the
Things you believe.
Never allowing the false
To deceive.

Although I can't see you --
And miss you a LOT --
I thank our Lord often
For what we have got.

For we aren't just sisters,
But friends -- strong and true --
With heaven to share in
When this life is through. 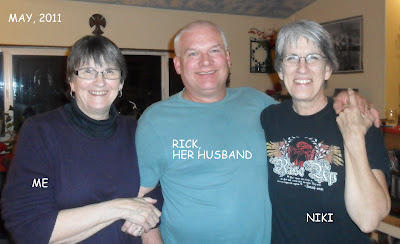 I posted when her 60th birthday was occurring in 2010.  It was my gift to her and her family.  It's long, but it isn't too boring.  It would let you come to know and understand the lives of both of us.

What a wonderful tribute to your sister. Such a blessing.

Its a great poem and I would be so honored if my sister wrote something like that! I'm glad I got to meet your Niki and her husband when they visited here last Fall.

What a nice post in tribute of your sis'. BTW, I love her! She is one of the best Sunday School teachers I have ever had. She really put a lot into her lessons and made her students think and dig into the Word, too. Oftentimes, it was just me and my sis' in class, but Niki still came prepared to teach - if only for the two of us. She is a loving and lovely woman! :)

Thanks, Jo. Actually, there is a scripture that I think of much and quote often and it is, "For it is God Who works in you, both to will and to do of His good pleasure." We don't "burn out" if we are doing God's will and we don't resent it either, because it's something that God puts in us to the degree that we're not really happy unless we are doing His will. People will try to praise you or give you credit for what they consider to be wonderful (actions, attitudes, behaviors etc) but God is responsible because He's the author and motivator. Anyway, those are just my thoughts. N.

Two Godly women fortunate to be both sister and friend. What a blessing!

Ruthie, I knew you'd love to hear more about her. And her teaching is so good...

Niki... the scripture given to me when Stanley led me to the Lord was exactly the one you popped in here. Interesting, doncha think?

And thanks for so much encouragement from my dear friends and family. It's greatly appreciated.

Oh Joanne, reading your poem to Niki indeed gave me a much needed grin this afternoon--especially the part about the toilet.

That is such a wonderful poem you wrote for your sister. Thank you for sharing at Tell Me a Story.
The fact that she came to the lord through her baby sitting job was amazing. God is Good!

Caryjo, this is a beautiful tribute to Niki. I'm so sorry you all had such a horrible childhood. I'm so glad you found each other now as true sisters who will spend Eternity together. A very heart-warming story!

What beauty from ashes. Thank you for sharing this story and tribute to your sister.

It is a great poem. It seems you a rough time growing up just like many of us did, but thank God for his gift of salvation thru His Son.

Awesome post... The love of a sister... even bigger because she is our sister in Christ... What an amazing gift to her and to me... I'm touched. Thank you.

What a wonderful gift for your sister, especially the end. To know that as God's children there is no end to the love we have for each other is precious knowledge.

Joanne - this story and poem goes to the heart. So beautiful... praise the Lord for his grace and mercy.

I am so happy to read that writing a poem gave you an avenue for communicating your feelings to your sister. Poetry is powerful.