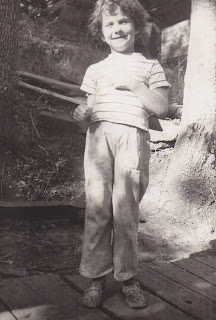 When I had just turned 6 years old, the summer of 1951, still living in the “Birdhouse”, outside Klickitat, WA, a rather unusual event occurred.  I don’t think I knew anything about angels, except when I saw something about Christmas and the angels singing to the shepherds.  That would have been “it”.  However, I happen to believe they were very busy taking care of me.

My Dad was headed out for milk and, instead of heading to Klickitat, he went the other direction to a farm about a mile up the road.  He took me with him.  He was driving an old-style station wagon.

In that area, the Birdhouse, the other houses, the pastures, fields and farms were on one side of the road.  The Klickitat River was on the other, with just a few feet between it and the road, with only a grassy ditch and a few boulders before the rushing water. 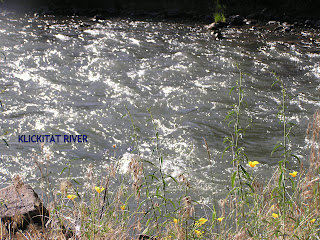 Since we were driving north, that meant he would be turning left onto the farm.

Before we reached it, when I could see the farmhouse in the distance, I was thinking, “I don’t want to be left in the car.  I want to get out.”  To be ready, I held onto the door handle very firmly.

Well, Dad slowed down to turn left, the door handle went down, and I swung out of the car, grasping the handle.  The door opened wide.  I was scared, of course, but also thinking, “If I let go, I can land in the ditch and it could have snakes!”  So, I held onto the handle.  The door swung back towards the car, and I was forced to let go, and tossed under the car.  The car was moving slowly, since Dad was preparing to turn, but not stopped.  As a result, the rear tires ran over my legs, angling from the top of one leg to the calf of another.

My Dad hit the brakes, of course, jumped out of the car and over the hood to find me.  Before he reached me, behind the car, I had already rolled over to my stomach and was banging my head on the soft tar road and saying to myself, “Stupid.  Stupid.  Stupid.”

There was a car behind us and it stopped immediately.  The driver was a teenaged boy that we knew.  “Bob”, 16, had been in Klickitat at the Swimming Hole, and was wearing only swim trunks, because he was heading home. 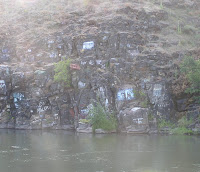 He was embarrassed to be in this situation, with nothing else to wear, but he held me in the car while Dad drove [raced!] to the nearest town with doctors and a hospital.  Goldendale and Klickitat are about 20 miles apart, which wouldn’t seem like such a big deal in our present way of thinking, except, in this case, Klickitat was in the valley by the river and Goldendale was up on the high plains. 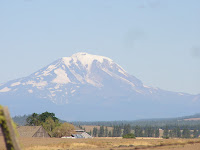 This road then [and now] would have a section that was hairpin curving up the grade, a rock cliff on one side, a drop to the river.. sometimes hundreds of feet... on the other and no guard rails.  I expect Dad drove dangerously, to say the least.

When we reached Goldendale, Dad went to a Doctor first.  All I remember is laying on the table and having my jeans cut off.  You see, if nothing else, the fact that it was July, HOT, and the road covered with tar, my jeans were black from that soft road topping, and stuck to me.  The tire pattern was very clearly seen.
After the jeans were off, which I was angry about, because I liked them, Dad took me to the hospital. Next medical event was an X-ray.

Miracle?  My legs were not broken.  I had very few bruises or scrapes.  Dad was told that the reason my legs weren’t broken was because the angle was the only one that would have prevented that from happening.  The worst bruise?  My forehead where I had been hammering on the ground, angry at myself, because I was “stupid”.

I was in the hospital for 3 days.  They didn’t think I would be, or should be, walking and putting pressure on my legs.  Now, remember, in those days, especially a small hospital, when there was space in a room, under fairly normal circumstances, you would simply be in a room with whoever was there.  The room they put me in had an “older” lady and she was in some sort of recovery, but needed rest.  I anticipate that I drove her crazy.  I was supposed to stay in bed, but didn’t.  I climbed in and out, and, sometimes, jumped up and down from the bed.  Mom and Dad could come in the evening for a short visit, but I vaguely recall that they were told that I wasn’t doing what I was supposed to.  Since I didn’t seem to need more recovery, they sent me home.  I don’t think I was ever back for a checkup.

Now, when I reached home, I think I actually settled down and rested more for a short stretch.

I have never had future leg issues.  My muscles and joints are usually painless, even 60 years later.  Compared to many of my family and friends in my general age range, that is pretty amazing.

When I think of the times that God protected me, knew me so long before I knew Him — DUH!!! — and had assigned angels to me, I expect this was one of the top ones; definitely not the first one, knowing my childhood seriosity history, but rather important, doncha think?
And, remember that time, recalling those amazing details, I always smile.  Big Time.
Posted by caryjo at 4:11 PM

Great story!!! I always think of the song, "Angels Watching Over Me" by Amy Grant. I think most of us, if we stopped to think for a little bit, would recall many "close calls" in our lives. I love the "stupid...stupid" comment....hehehehe!