My Mom died/went to Heaven on this day for 6 years ago.  Anyhow, I always think of being with her in Heaven.  AND about every year I put pieces of her on.  Well, she was 90-1/2 when she died.  I'll show the 90th year in Tacoma when I was there with my son and daughter and many of her grandkids.  So, I'll just show this.  Always makes me smile.  When I was a young kid in Tacoma when she had put us at her mom's and I was about 4.  The last time I was officially shown with her was when she was in her 80s.  So, here it is.  AND she had come to the Lord when she was 82.  She had known Him for a long time since she was a kid, but she was doing other things.  My Dad story is a whole different thing... he went to Heaven in May 20s, 1984, and he was 65.  I've shared that too very often re: how he came to the Lord.  Now I'll put the pictures that are worth a smile. 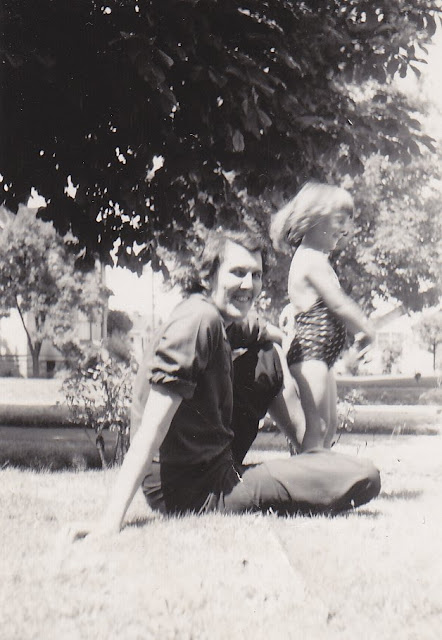 Posted by caryjo at 6:59 PM 5 comments: Links to this post

HEADING TO BED AND WORSHIPING!!!

Well, my body has changed and a few months ago it was indicated that I should go to bed usually between 7:00 and 8:00 in the evening and getting up between 8:30 and 9:30 in the morning.  I do it, and I worship, pray, praise, glorify, and honor the Lord.  I sometime pray for people that is dropped onto my brain and heart.  I focus all night on the Lord and when He has put some of the dreams re: me and people... I'm getting to the bathroom a couple times and turning my legs and body issues, so the dreams quit momentarily.  When I'm in bed and continue to worship and praise Him, I get onto another dream.  In the morning when I wake up I never remember exactly what has been dropped onto my dream issue.  Anyhow, I can focus on the Lord all day and all night.
BTW,  I can't drive, and I stumble too often with my legs and use my canes, and I can't read the Bible nearly as well and I can't read the books I have. I have hundreds of books, and many of them are very involved with the history info from Christians re: the demonic. The Lord has used me for about 20 years to see this info and break out the demons, if possible. He used me to drive around and about our states to pray and worship.  And He has had me in a few nations.  So, as I've said, I can't go around any more, unless someone takes me around a bit.  I'll continue to worship and pray when I see the spiritual stuff. In the home, of course, I can't read books, but when I see the info I worship the Lord.  Anyhow, I'll just show what I really love.  When I'm driven around I take photos of clouds, sun, and moon.
(As soon as this is put on tonight, I'll hit the bed.)

Posted by caryjo at 6:52 PM 4 comments: Links to this post

STEVE'S 44TH BIRTHDAY... AND HE WAS BORN AMAZINGLY!

In the Spring, 1972, I became pregnant for the serious situation time. I had had at least two miscarriages in the previous two years, and, while driving home from church that Sunday afternoon, the pain began strongly again; I was only 6 weeks pregnant. It was the exact feeling and timing of the other miscarriages. I went to a Doctor, who was available at his work place immediately on that Sunday afternoon, and after checking me, he suggested that I not have this baby, that I let "Nature" bring this to an end. He gave me some pills to take "whenever I felt that pain."  Well, at home, I was in pain that day, but even when in pain, I didn't take any pills; I was not a medicine-oriented person. What I discovered many months later was that the pills would not have relieved the pain, but would have caused a medical abortion.
Occasionally, during the next several months, other doctors tried to convince me to let them bring the birth to an end. I was told that this baby would be a mental and physical vegetable, that I would always have to care for "it" and would never be free OR that the baby could die very soon and I would suffer from that death; "Mother Nature" had tried to free it "now."
Well, I refused. Can't say I wasn't frightened about what the results would be. In fact, I was terrified during the pregnancy, especially when I was forced to be in bed for about two months that summer and had this fear pouring through my heart and mind constantly. But, I knew it wasn't what God would want me to do, so I simply couldn't; sometimes I felt Him hold my hand and encourage me to stand in that rocky area. The baby's Dad, my former husband, basically just told me to do what I needed to do. Except for one "spiritual" Mom in that portion of Redwood City/San Mateo who gave me a Word when she could, I walked through this alone.
[You must recall or know that in those days talking to a pastor about these physical issues was not reasonable, or going to a counselor wasn't easy (especially since I couldn't afford it), and ultrasound wasn't a medical part of our lives. Life has most certainly changed now. I also had no family I could talk to.]     The baby was due on January 12. On the 16th, I was rushed to Stanford University for the delivery about 9 at night. Labor had kicked in that evening. When I was in that place when the baby was being delivered, about 6:30 AM the 17th, the nurse asked if I wanted to look in the mirror so I could watch the baby come out. All of a sudden, I was obviously more terrified than anyone, including me, knew it. I screamed, "NO!!!"
And then the baby came. And HE was not a vegetable. He looked exactly like his sister who had arrived October 9, 1969, in that same hospital, he was an ounce heavier than she had been, and 1/2 inch longer in length. That was all. Period.
They did some stuff to me and pulled out a bunch of my "baby" stuff -- so I could never have a baby again -- and I was in the hospital for a few days.  Then me and my baby went home. Didn't know anything about the Roe v. Wade abortion approval, even though this picture was taken that very day, January 22nd. 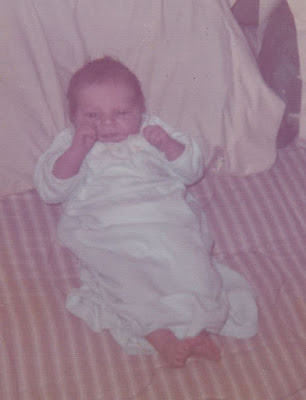 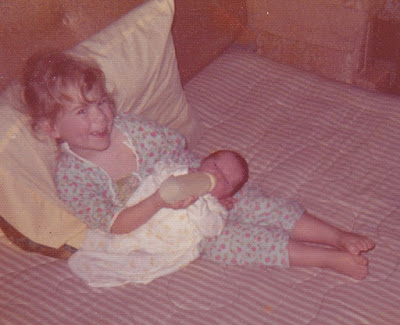 In fact, I didn't know anything about that for some time; life was extremely stressful and my recovery took several months. Survival was my only focus then.
But to know that the Lord gave me a son at the same time that law came into being, and that He had helped me walk through those horrible times with very caring and concerned doctors, probably some of the most seriously compelled to do the best for me and the "fetus", still just fills my heart with appreciation for Him. 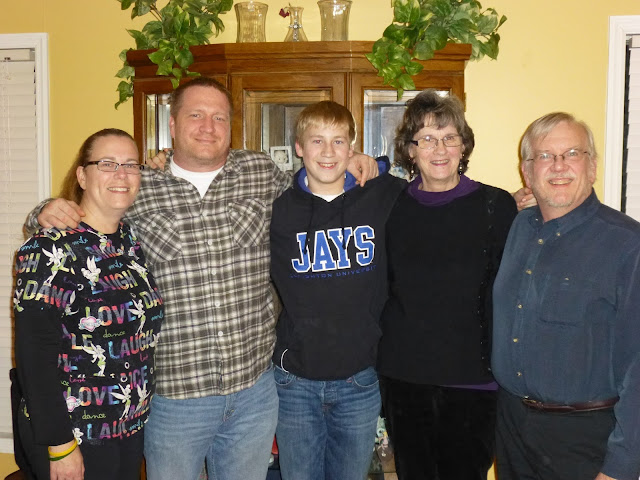 Posted by caryjo at 5:41 PM 7 comments: Links to this post

Twenty-six years ago in January and February we were in a portion of Uganda that was in the main city of Kampala, a side city of Jinja which is right on the Nile River, and about 40 miles north from that Kampala to what was called New Hope Uganda.  The NHU, when we were there, we saw wonderful leaders and they did some teaching and some to fix the acre area.  We sure met met many.  We were at churches in Kampala and, suddenly, I was a preacher in a couple churches and was teaching kids.  Dave and I did what we could.  We didn't know when or how the Lord would have us there again, and we were there in early September, '94 and back and forth a few times.  Here in Omaha or there in Uganda.  We wanted to be there forever, but the Lord used us in unusual ways.  Just wanted to show a few small photos that are so special re: what we did.  Always worth a smile!  I've put the Word of God on some of these photos when sharing.  SO here they are.   OH... and we've had so many "sons", "daughters", "grandkids" from there.  We hear from them and are filled with love from several.    [AND sorry if I didn't say the words right.  I'm struggling with my dementia brain issue. AND being in Uganda several times was a God-gift!] 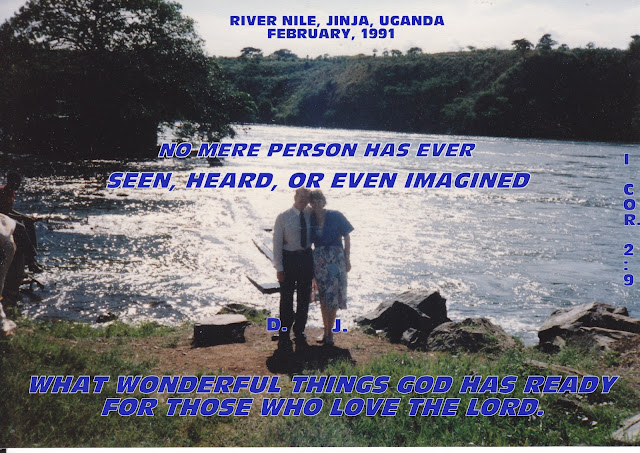 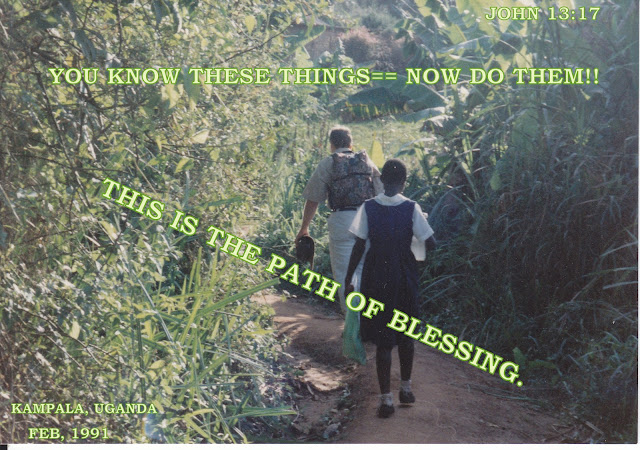 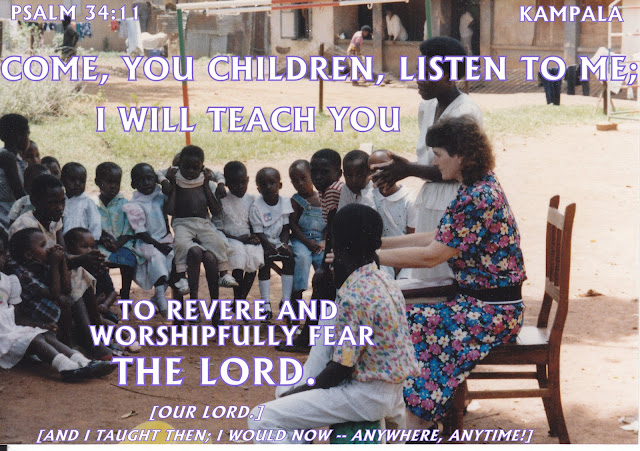 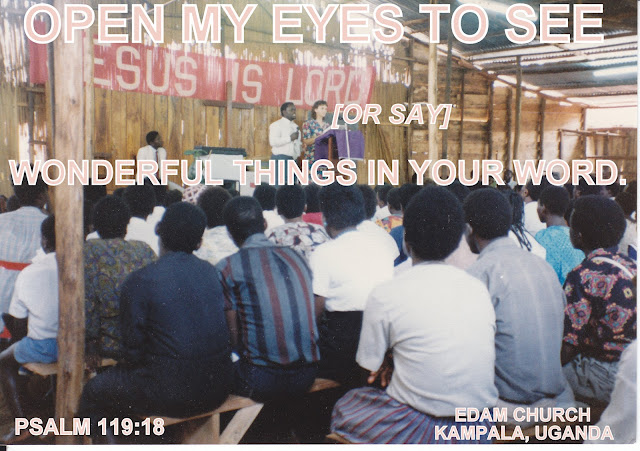 Posted by caryjo at 4:00 PM 4 comments: Links to this post

DRIVEN AROUND OUR AREA! LAUGHING AND SMILING!!!

As cold and as dark and as windy, my husband has driven me around on Saturday and Sunday and I saw some wonderful  things.  I can't do much of anything, and, for a year, I can't drive, BUT he just grabbed my heart and my attention.  Today, he's working at our church and doing a piano student in another part of our town.  He just got home today and he'll be going to our church and other churches tomorrow, as far as I know.  I can't do much, but, as I've said before, I can worship and pray and glorify the Lord.    Bless you all! 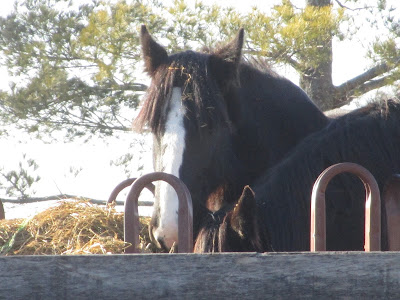 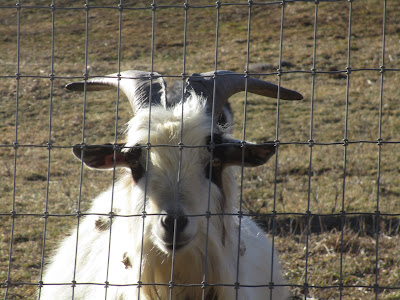 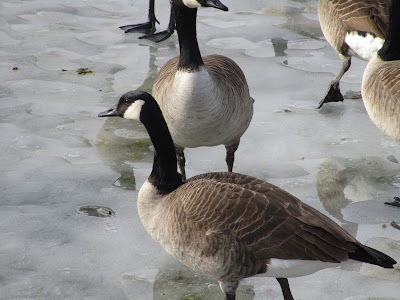 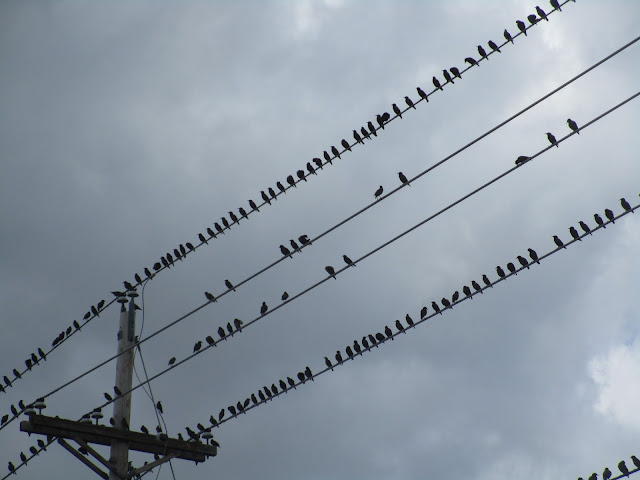 Posted by caryjo at 5:44 PM 2 comments: Links to this post