When the murder hit the news on Friday, I was heartbroken.  That's not unusual, of course, since I've been involved in First Responders, and know that the next important appointment will be at the murder site.  But this time, since it took place only approximately 3-1/2 blocks from my house, it really hit my heart strongly.

I was quite relieved that the FR time would be on Saturday afternoon at 4:00.  Would be MUCH warmer than if done on Sunday... 50s on Saturday, 10s on Sunday.  Because of the warmth, more of us would come, more family and friends of Tristan would come out, For the first time, I walked down the street.  A good way to make it; a sad reason to make it.

When I arrived, a few minutes early, and saw the front of the
house, I took a photo.  According to the news info, that shot was made after Tristan's murder.  The murderers had gone up the steps and shot through the door.  He was on the couch, and the bullets hit him, killed him.  THEN, when driving around and about afterwards, laughing loudly, they shot more and more bullets at the house.  That's when the window was hit. 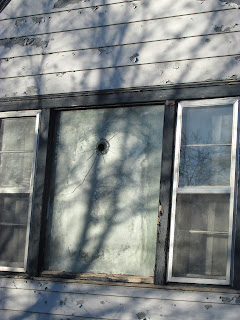 The amazingness hit right before we started praying and connecting.  I met his dad, Carl, and he said that Tristan was a Christian, and is in heaven.  Carl told me how happy he is to know that his son, even though murdered, will be in heaven, waiting for him and other family and friends.

During the prayer time, the main leader began.  When Bruce finished, and said the next person could continue, Carl immediately jumped in, prayed over and for his son, and worshiped the Lord.  His pastor arrived and prayed.  One of our main prayer leaders in town, Barb, prayed [heard on TV report].  A couple others.  And I prayed.  My prayer was basically explaining the sorrowful that hit me about the murder, and the joyousness in my heart now because Tristan is in heaven.

I actually spent a few minutes with Carl.  I also was touched much by watching the family and friends.  We would see them crying.  I always try to keep some tissues in my pockets to pass along when at one of the FR situations.  Well, did it then, too.  Helped about 3 of the family.  One of my biggest blessings was that I was next to Carl when we  were praying over and around the family and friends, so I was able to lay my hands on him.
A couple hours later, after our FR ending, in the early evening, I went to the house again.  I wanted to leave our name, address, phone number so Carl and his wife could get in touch easily.  Have invited them to visit.  When I walked to the front door, I was shocked.  The storm door showed the metal sides... but all the glass was gone and I needed to just step over the metal.  Inside, one of the tallest, nicest fellows I met that day, Jerry, his dear friend, greeted me and showed appreciation.  Carl came out of a room when one of the folks knocked and said a lady was to see him, he was very nice to me.  I was able to give him the info.  The only funny moment was when he said we [him and I and the group] are all family.  And I know we smiled a bit because I was the only white person.  I'm looking forward to time with him and his others.  [AND the house was Tristan's; Carl and his wife live about 1/2 mile away.]

Again, this was one of the saddest and most glorious murder sites.  He's not the only Christian who had been murdered.  In the 5-1/2 years I've been involved, a few of those murdered were killed through a gang situation... sometimes they had left it and were aimed to death by their "friends" and, a couple times, murdered because someone drove by and shot at the house and someone just happened to be there.  One thing we've sometimes agreed on is that it's better for Christians to be murdered than these others who wouldn't have a chance to turn to the Lord.

So that, hopefully, will open hearts.  Mine truly is.

Joanne, your ministry is so amazing and such comfort you are able to give even in the event of a murder. I know the family appreciated your visit especially Carl. Thank you for sharing with us here at "Tell Me a Story."

Wow… Bittersweet is right… I can't imagine it. Bless you and the rest of the FR's for your bravery and heart to be there for the struggling family and loved ones. I don't know if I could do that… Thanks for being obedient to your calling and ministry, Joanne… I'm praying for the rest of Tristan's family.